The Flying Heritage Collection is the collection of WWII aircraft that belong to Paul Allen, co-founder of Microsoft Inc. FHC is now located at a WWII hangar at Paine Field in Everett, Washington. FHC currently flies 11 of their WWII aircraft during the summer months. While most of the FHC collection is flyable, there are a few aircraft awaiting restoration which needed to be transported to their new facilities at Paine Field.

Our first opportunity to work with FHC came in spring of 2008 when we moved a set of WWII aircraft from the hangars at Arlington, WA to the new facilities. We were assigned to move a F6F Grumman Hellcat, an “Oscar” (the American nickname for a Nakajima Ki-43 “Hayabusa”) and their 2 static display WWII Fieseler V-1 Flying bombs (also called buzz bombs and Doodle Bugs) from Arlington to Paine Field.

In each case the aircraft needed to be partially disassembled and prepared for the move. The next step was to move them out of their hangars and lift them with a crane to be positioned on flatbed trailers. The move from Arlington to Paine Field, 36 miles, was made at midnight with police escort due to the wide loads. (The Hellcat was 14 feet wide at the wing stubs.)

With the safe arrival of the aircraft at Paine Field we reassembled each to a display worthy condition.

Our next assignment was to work with them to move their FW-190 from The Museum of Flight in Seattle, WA, where it had been on temporary display, to Paine Field. We moved the FW-190 out of the Museum of Flight, Seattle, WA and pulled it across the airport to one of Paul Allen’s hangars which had been cleared for our use. There we partially disassembled and prepared it for loading and transport. The FW-190 was moved on two flatbed trucks to Paine Field. The aircraft arrived safely at Paine Field where we reassembled it to a display worthy condition. 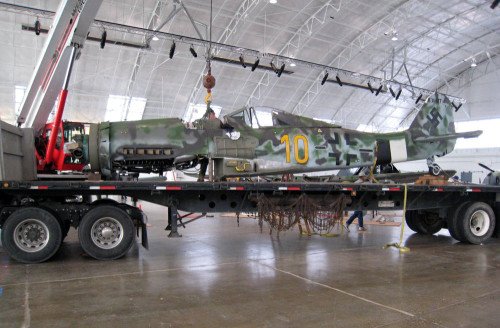 We also assisted them to move their Mitsubishi A6M3 Type 22 “Zero” from Chino, California to Paine Field. Like the FW 190, we partially disassembled the Zero. We removed the prop, engine and tail section. We then removed the fuselage from the one piece wing and loaded the Zero on to a transport. The Zero was moved on one flatbed trailer to the Museum at Paine Field where we assisted the staff to reassemble the Zero.