Museum of Flight
From Palmdale, CA to Seattle, WA
From its conception to its retirement, the Blackbird was, and is, a unique aircraft. The move of a Blackbird from Palmdale, California to Seattle, Washington was no less special. In 1990, when the United States Air Force Heritage Program made 19 Blackbirds available to museums, the Museum of Flight was one of the few civilian museums assigned a Blackbird. The airframe designated for the museum was an A-12, an earlier version of the more familiar SR-71. This aircraft had not been flown for almost 25 years and the cost of returning it to an airworthy condition was prohibitive. It had to be disassembled, transported to its new site and reassembled there. Reassembly was to include long-term preservation, historically accurate restoration and preparation as a museum exhibit. 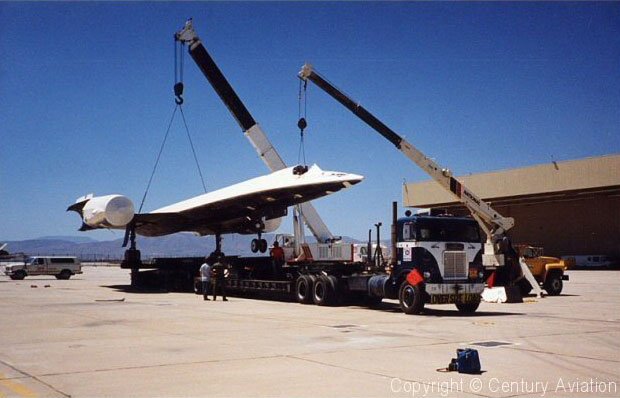 Disassembly had many potential stumbling blocks. The Blackbird had to be reduced from its 55 foot wide stance to a size that could be transported through three states. Due to the nature of a “spy plane” and its missions, very little information concerning assembly, much less disassembly, was available from the U.S. Air Force or from Lockheed. The disassembly process was designed, on site, during inspections prior to the move with a special emphasis on not cutting the airframe.

Transportation included designing the cradling to carry the fuselage and directing the loading of it and the four other components onto the trailers. Transportation also meant accompanying the aircraft during its trip to provide public relations and 24-hour security as well as monitoring the safety of the loads and supplying technical assistance to state agencies and transportation crews.

Reassembly first took the aircraft through a complete inspection from tip to tail and a thorough cleaning. The next step was the preservation of all internal parts and reassembly of all components. Following extensive research for historical correctness of the paint scheme, the Blackbird’s external surfaces were prepared and painted and the markings were applied.

The aircraft was moved from its reassembly site to the Museum of Flight’s Great Gallery and placed in its permanent exhibit site. Finishing touches were provided and the Lockheed A-12 Blackbird exhibit opened to a large and enthusiastic aviation community.